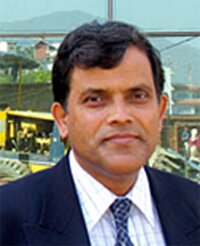 The father of modern Neuro surgery in Nepal, Prof. Upendra P Devkota, FRCS, FNAMS is the Founder and Senior Consultant of the Institute Formerly, Chief of Neurosurgery, Bir Hospital Minister or Health, Science and Technology Government of Nepal. Professor Devkota is one of South Asia's most well-known and respected surgeons.

Reflecting on the opportunity of training in neurosurgery in the UK, Professor Devkota has said: "It might not be an overstatement to say that British neurosurgery was leading the world from the 1960s to the 1990s and therefore, for a trainee in the 1980s, the UK was by no doubt the ultimate destination. As a young trainee from a developing country, to train under two globally acclaimed academic professors of neurosurgery, Sir Graham Teasdale and Bryan Jennett (who invented the Glasgow Coma Scale) and then to move on to other similarly famous British units at Atkinson Morley's and the National Hospital Queen Square were, undoubtedly, grooming in the best of neurosurgery that Britain could offer.  He imbibed everything around him, got thorough grounding in all aspects of neurosurgery and, above all, got the inspiration to dream for higher ideals."

In 2002, Professor Devkota was appointed as the Minister of Health, Science and Technology by His Majesty's Government in Nepal. During his time in this senior cabinet post, he was able to achieve a number of important health reforms and gather the political support required to develop the National Neuroscience Institute.

It was while in post as Minister that Professor Devkota was inspired to design and build Nepal's Neuroscience Institute, which opened in 2006 and where he is currently the senior neurosurgeon.

This is very Heart touching to all Nepalese citizen and we must learn from Dr Devkota's decision to stay in Nepal. Prof. Devkota, has worked hard with evidence based ethical service to the Nepalese people and patients of South East Asia and has provided a new dimension to the development of Neurosurgery.