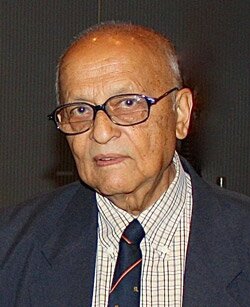 Prof. Dr Hemang Dixit is a Nepali born at Kathmandu in 1937. Following schooling at Sherwood College, Nainital and Bishop Cotton School, Shimla in India, he went to the U.K. to do his A-Levels. Starting his medical education at Charing Cross Hospital Medical School of London University in 1956 he completed the same in 1961 doing both the MBBS (U Lond.) and LRCP, MRCS of the Conjoint Board. After his year of internship at the Charing X Hospital on the Strand, he went on to do his DTM & H from London School of Hygiene & Tropical Medicine and the DCH (Eng) from the Conjoint Board, London.

Returning back home to Nepal in 1965 he started work at the Bir Hospital at Kathmandu. Subsequently in 1970, he was posted to the newly established Kanti Children's Hospital. In 1975 after about 11 years he left government service.  Joining the Institute of Medicine (IOM) of Tribhuvan University as Reader in Child Health in 1977, he subsequently became Dean of the IOM for almost four years. After his term as Dean, he later became in 1985 the Professor in Child Health. In that capacity he worked once again on deputation at the Kanti Childrens Hospital. Being also director of the Health Learning Materials Centre of the IOM, he was involved in the production of teaching/learning materials. He retired from the IOM in June 2000.  He joined Kathmandu Medical College and from Feb 2001 till June 2013 he was the principal of the institution.  Since then he has become head of the Medical Education Department there.

He was awarded the Coronation Medal in 1973 and later the Suprabal Gorkha Dakhin Bahu in Dec. 1993. In Feb. 1994 he was awarded a Gold Medal for "Development of Paediatrics in APSSEAR Countries" at the Paediatric Conference held in New Delhi. In 2002, he was awarded the Birendra Aiswarya Sewa Padak.  He was awarded the ‘Qualified Teacher’ award by the Dr. Balaram Joshi Gyan Bigyan Rastriya Purashkar Pratistan in October 2009.

His writing career in Nepal started with a two year stint as Chief Editor of the Journal of Nepal Medical Association, starting in 1965/66. He has also been Chief Editor of the journal of Institute of Medicine form 1983 to 1992. He has a number of articles to his credit and has been involved as editor or VOLs I, II, III of the Annotated health Science Bibliography of Nepal, covering the periods 1950-77, 1978-87 and 1988- 94 respectively.  He is an occasional contributor  to various newspapers of  Kathmandu.  Besides this, he has written one children’s story book and five other novels under the pseudonym of Mani Dixit.  More information about him can be found in his website: www.hdixit.org.np